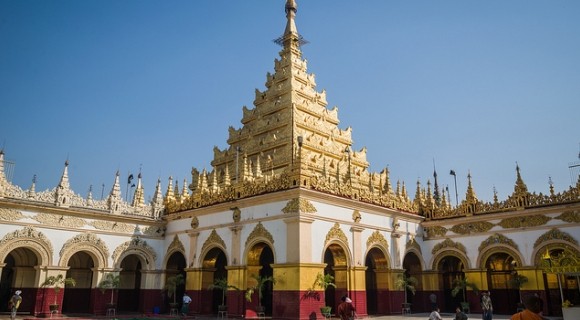 Lying in the south of Mandalay, Mahamunni Pagoda is a great and most revered pilgrimage destination in Myanmar. It is famous for The Mahamuni Buddha image- one of five embodiments of the Buddha was created when he was alive.

Legend has it that in 554 BC, the Buddha visited the Dhanyawadi city of Arakan. King Sanda Thuriya desired to cast a Buddha statue to worship. After completing, Buddha blew upon statue and turned it into his embodiment called Mahamunni image. Since then, Mahamunni Pagoda has become a spiritual center of Buddhism attracting a great number of Buddhists and pilgrims.

The temple is actually an overall architecture lined a road from Mandalay to Amarapura in the southwest, including a central shrine which is surrounded by a campus of grass, A major teaching monastery of about 400 monks called 'Thudhamma', the Museum of the Life of Buddha and stalls under the domes selling religious items like incense, candles, rosaries, flowers along with small restaurants for visitors.

The Mahamunni image was placed on a throne in a small chamber whose ceiling, domes and gilded columns decorated with elaborate frescoes. Buddha statue is cast in bronze, weighs 6.5 tonnes, and reaches a height of 3.82 metres including pedestal with in a familiar posture: the legs cross each other with the inwardsoles of the feet, the left hand lifts, and the right one touches the ground to testify to his past good deeds. It is really a great art masterpiece of Myanmar with a gorgeous coating of gold and sophisticated gold leaves applied to the body and limbs. On statue's head is a golden crown jeweled diamonds, rubies and sapphires. Every morning at 4 a.m, Buddhist devotees, pilgrims and monks have to perform a sacred ritual: washing the face with scented water, using new towels and traditional toothbrushes made from Neem tree before kneel to pray or get on the throne to apply gold leaf to the statue. On the left side of the northern exit, there are 2 bronze Siamese images, 3 bronze lion images and 1 bronze three headed Ayeyawun elephants which are believed to heal illnesses by rubbing ill parts against statues.

There are four walkways, in which the eastern one leading to the front of the image is most crowded with small stores along both sides selling various crafts. Another one leads towards the marble cutters' quarters where contains the unfinished statues. The remaining ones are rather quiet but they are also meticulously carved and always open.Outsidethiscentralareaare other pavilions, in which one has displayed two huge bronze celestials holding up an immense gong, one has preserved Khmer statues taken from Thailand.

Mahamunni Pagoda is the golden symbol of Mandalay, a sacred place to pray and feel compassionate Buddha presenting here. Let come and discover the legendary beauty of one of the most revered temples in Myanmar.