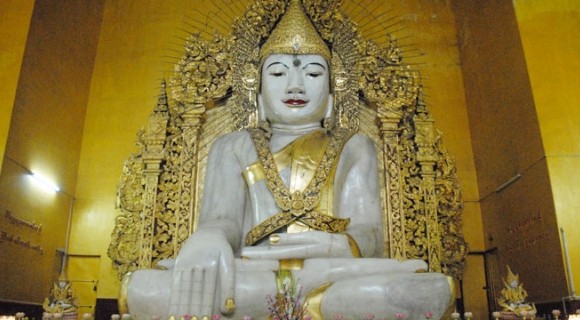 One of the great prides of the Mandalay city is Kyauktawgyi Pagoda with the huge sitting Buddha statue carved from a single block of white marble from the Sagyin Hill.

Located at the foot of Mandalay Hill, Kyauktawgyi Pagoda was constructed from 1853 and completed in 1878 by King Mindon. It is a replica of the Ananda Temple at Pagan in exterior form. It is famous for an 8 m, 900 tonne Buddha placed at the centre. The statue was carved from massive marble and 10,000 men took 13 days to transport the stone from Ayeyarwaddy River to current location. In royal costume, The Buddha Image sits majestically with his right hand touching the ground- a symbolic image for ritual “calling the earth to witness”. Buddha’ eyes are slightly closed, which is rather strange because almost common Buddha statues in Myanmar often widen the eyes.

There are four covered corridors on four directions of the central shrine: North, South, East and West, in which each side consists of twenty Arahat figures representing Great Disciples of the Buddha. Four Bodhi trees from Sri Lanka were grown at four corners. However, now onlyonetreeinthe northwest is still alive.

Kyauktawgyi Paya’s festival,which is one of the largest and most revered festival in Myanmar , is normally held for seven days in October, attracting a large number of visitors every year. Kyauktawgyi Pagoda with the grandiose Buddha statue really deserves to be a masterpiece of humanity.