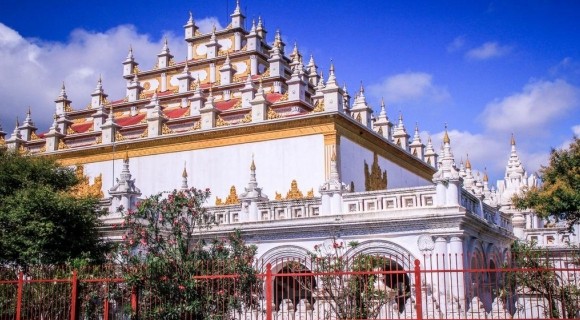 Mandalay City will make you surprised by the unique and splendid architectural ensemble, notably Atumashi Monastery-one of the most gorgeous buildings in Southeast Asia.

Constructed in 1857 by King Mindon who moved the capital to Mandalay, Atumashi Monastery is great pride of Myanmar people for over two hundred years. Initially, The Atumashi was a palatial wooden structure plastered by a thick exterior layer of mortar and built on a high background reached by a formal ceremonial staircase. Designs in Myanmar Buddhist architecture often appear "pyatthat"- tapered tower toward the top). However, Atumashi Monastery is a new trend in Myanmar architecture with a giant majestic structure surrounded by five rectangular staircases.

King Mindon ordered to build a huge, about 30 ft (9 m), image of the Buddha made from his lacquered silk clothing which was placed in the centre of monastery. Internal structure kept a lot of precious treasure, in which the most prominent is a large diamond placed in the forehead of the Buddha, four complete sets of the Tripikata (the ‘three baskets’ of the Buddhist sacred texts), and much more. During the invasion Upper Burma of the British in 1885, the diamond and other treasures were stolen before the entire Atumashi Monastery was burned down. In 1996, the Burmese archaeological department conducted to rebuild it with human resource as prison labor. Although the present Monastery does not show all spectacular and splendid beauty of the original building, it is somewhat reminiscent of the sumptuous and magnificent past of ancient Mandalay capital.

Atumashi Kyaung Temple is really an interesting attraction you should not miss in the tour to Mandalay.