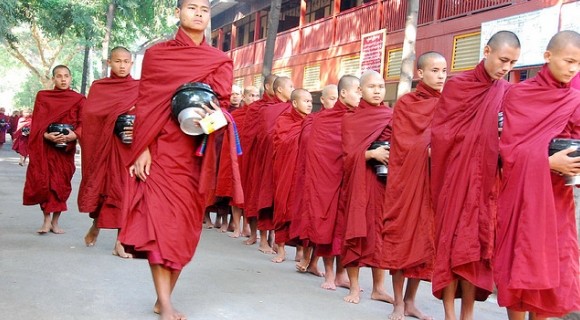 Amarapura is known with the ancient Buddhist architecture bearing the stamp of history of Myanmar. The Mahagandhayon Monastery is considered one of the highlights of this former capital.

Over Buddhist Lent, over 1000 monks from everywhere gather at the monastery, creating a sacred atmosphere of Buddhism in Amarapura. In here, visitors will witness the traditional ritual of alms round in the morning. Monks line up vertically at 11am in red or white gown with a large black bowl on their hand to take food and eat in the common dining room. The devotees or pilgrims regularly give alms to them, called pongyi, which is an act to accumulate the merit. Monks receive and do not need to thank for it.

The Mahagandhayon Monastery is one of the largest and most famous monasteries in Myanmar. Coming to Mahagandhayon, visitors will experience the pure life of the monks and learn more about Buddhism.