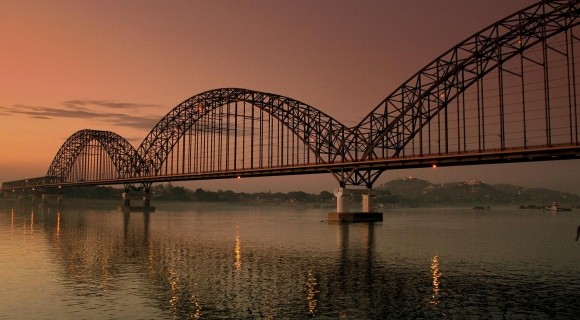 With a length of approximately 1350 miles (2,170 km), the Ayeyarwady River or Irrawaddy River is the largest river in Myanmar and also the soul of the resident in here. Flowing through the heart of Myanmar, the river plays the crucial role as a commercial waterway between economic regions as well as a place with the enormous potential about tourism.

The Ayeyarwaddy River goes along the country from north to south, through a nine delta into the Indian Ocean. Before transport system was developed in Myanmar, it was called as the "Road to Mandalay". Even until now, a significant amount of goods, rice and food are still transported by river through a complex system of canals. River water is also used to irrigate the vast rice fields and fertile soil in Myanmar. Ayeyarwaddy River has become an important part of working life and the spirit of the Myanmar people. It carries dreams and hopes.

When traveling in Mandalay, tourists can choose to go along the Ayeyarwady River on the elegant cruiser as the most pleasant and leisurely way. There are plenty of sandbanks, islands and oases scattered throughout the length of the river. From the boat, visitors will admire an unprecedented beautiful sunset on the skyline, many ancient stupas and the idyllic life of the Myanmar people. Inwa Bridge spanning the river is also one of the highlights of architectural complex in this area, which marks the Burmese independence in 1954. If you're lucky, you might see Irrawaddy dolphins in the lower reaches of the river. They are kind of small river-dolphin, helping fishermen decoy fishes into the net.

There are many things waiting for you to explore in the Ayeyarwady River. Let come and experience!