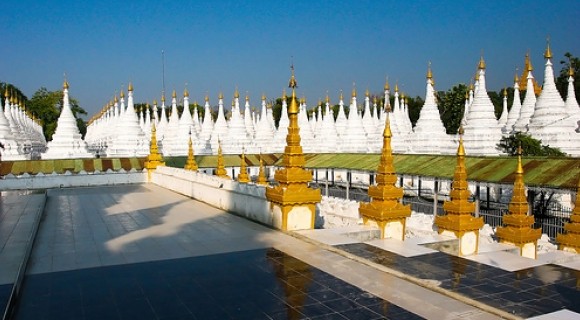 Referring to books, we often think of the white pages printed black ink. But perhaps few know that there is a huge, unique "book" made from stone with 1,458sheets. It is Kuthodaw temple in Mandalay, Myanmar.

Located at the foot of Mandalay Hill, Kuthodaw Pagoda was constructed under the reign of King Mindon at the same time with Mandalay palace. Actually, the pagoda was built as part of the Mandalay palace in1857. It is a complex of 729 small pitaka pagodas or shrines of white Sagyin Hill marble called kyauksa gu. Inside each of them is a stone plaque recording the Buddhist scriptures on both sides. Each white marble slab has a width of 1 meter and a height of 1.5 meters. King Mindon Min, worried about the invasion of British in both territory and religion, decided to design this unique royal structure to propagate Buddhism: a set of Pali Tripitaka carved in stone. Therefore, Kuthodaw Pagoda is also called World's Largest Book. The record of the Buddhist scripture on the rock was absolutely not simple and it took three days to a carver of a closed two-sided slab. The entire process of carving started from October 14th, 1860 and completed on April 5th, 1868 with a total of "page" is 1,458 stones. After engraving the stone surface, grooves were filled with gold. However, over a long period and restored several times, gold words do no longer exist, only traces of inscriptions. The local people say that if reading hard in 8 hours a day, it takes 450 days to read and understand the entire book.

Among these slabs, Kuthodaw Paya central stupa with gilded dome makes the overall architecture extremely impressive, especially when looking from above like Mandalay Hill. A covered staircase striking with two-tone yellow and pink leads to the stupa’s top. At the foot of the tower is Chinthe, a half-human, half-lion sacred animal in the Myanmar creed, is responsible for guarding. The main shrine is situated at the end of the southern, which exhibited some sitting Buddha and the other virtuous eminent monks’ statues in Buddhist history.

Kuthodaw Pagoda is the unique ancient architecture which is typical of the Burmese national identity and the ethic spirit or compassion of Buddhism.