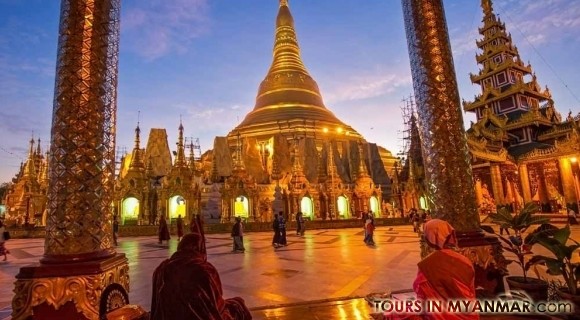 Once mentioning the Golden Land of Myanmar, travelers hardly miss out Shwedagon Pagoda, which is considered the most sacred and impressive Buddhist site here and according to the legend, it holds inside it eight hairs of Gautama Buddha, who is the founder of Buddhism.

Lying to the west of Kandawyi Lake in Yangon, Shwedagon Pagoda ("Shwe" means "gold") is officially titled Shwedagon Zedi Daw, also known in English as the Great Dagon Pagoda and the Golden Pagoda. The name is given to the pagoda because of its design. The lower stupa is plated with 8688 solid genuine gold bars. The top of the stupa, which is far too high for naked eyes to catch its detail, is set with 5448 diamonds, 2317 rubies, sapphires, and other gems, together with 1065 golden bells and the very top, a 76-carat diamond. Therefore, it is a priceless pleasure that can blind you in the midday. There is a pair of giant chinthe (mythical lions) guarding the entrances and the image in the shrine at the top of the steps from the south is that of the second Buddha, Konagamana.

There are a number of rituals that travelers must know and follow when coming to this pagoda. Visitors must put off their shoes before the first step at any of the entrances. In addition, Burmese walk around the stupa clockwise. They should find their planetary post, which is determined by the birth day of the week. Those planetary posts are marked by animals representing the day, such as galon (garuda) for Sunday, tiger for Monday, lion for Tuesday, tusked elephant for Wednesday, etc. Otherwise, they may not know which part of pagoda platform to go and make special devotional rites.

The Shwedagon Pagoda is about 2500 years old and considered both old and new. Old feature is evident given its long history of building and preservation, for example, some of the statues and buildings date back hundreds of years. Meanwhile, the new face is because the site has taken constant renovation, rebuilding. For example, the main entrance to the south was being rebuilt every ten years, often in different styles. For its original characteristic and importance, the Pagoda should be shortlisted as one of the most must-see sights when you land Myanmar in general and Yangon in specific.