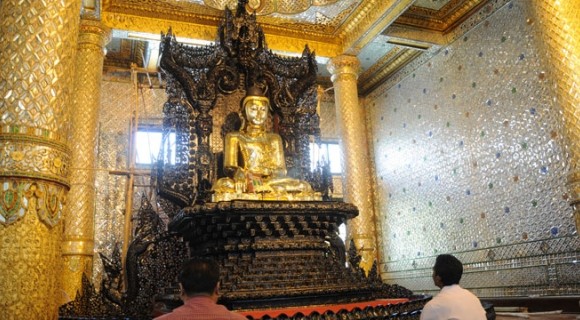 Located in downtown Yangon, Myanmar, near Yangon River, Botahtaung Pagoda was first built by the Mon around the same time as Shwedagon Pagoda. The pagoda has the original name of Kyanik-de-att which was a Mon name or Sandaw Shin as it is said to be the first pagoda to be enshrined with the sacred hair of the Lord Buddha. The current name Botataung was named after the thousand military leaders who escorted relics of the Buddha brought from India over two thousands ago. The meaning of “Bo” is “leader” and “Tahtaung” is “a thousand.”

In November 1943, Botahtaung Pagoda was destroyed in a bombing raid. The process of reconstruction was completed in 1953, with the new structure built to the original height of 132 feet, equivalent to 39.6 metres. The relics excavated during the time of repair were enshrined in the visible showcase on the interior corridor walls. Together with the relics are silver, broze and alabaster images of Buddha in a pagoda-shaped casket serving as a store of the sacred hair and relics of the two great disciples.

Front of the shrine is a road which brims with colorful array of shops selling fruit and other offerings. Then you can enter the main entrance on the right and marvel at the gleaming hall covered in gold. Unlike most of other pagoda in Myanmar, Botahtaung Pagoda is hollow inside and you can enter a large internal cavity. A hole in the centre of the pagoda shows the site of the ancient relic chamber, which is kept open. It rises on the circular base and especially its umbrella or country at the top of the spire in quite different from the conventional design. After renovation, a sign of new temples and other religious objects are constructed and the area of the site is limited because of the river front on one side.

Beside the design, festivals of the Botahtaung Pagoda play important role in making the number of visitors increase rapidly. Festivals are annually celebrated during the dry season with boisterous activities going on until dawn. There was weaving contests held on the precinct of the pagoda and also contest of cooking Htamane, which is a traditional Myanmar food made from sticky rice with nuts and coconut. During festivals, one of the cultural theatrical troupes usually performs overnight to entertain audience who come to pay homage and enjoy the festivals. The usual food stalls are also at the entrance as a complement to the festival traditions.

Contributing to the fame of the pagoda is the nanOo image, which was among the hundreds taken back to Britain after Myanmar’s annexation in 1886. Besides, the shrine of DawMya Nan New, who donated a large amount of jewels to the pagoda after its reconstruction, is a popular point to keep visitors.