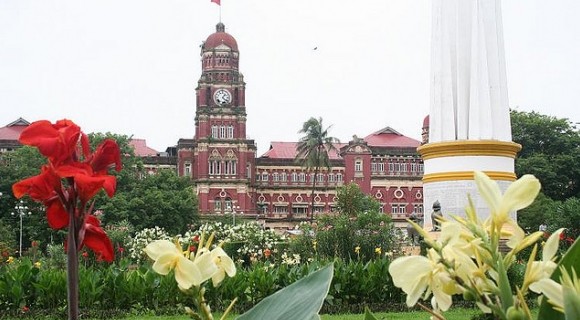 The park was formerly named Fitch Square or Fytche Square, which was after the English trader Ralph Fitch. The current name of Maha Bandula is set in order to remind General Maha Bandula who fought against the British in the First Anglo-Burmese War (1824–1826).

Maha Bandula Parkincludes the Independence Monument, a 48-meter (150 feet) obeliskwhich was erected to commemorate Burmese independence from the British in 1948. Surrounding the monument, you can find five smaller columns and bronze lions. People in this area say that thay hope to add a statue in this park to Bogyoke Aung San because he had dedicated his life to winning the independence of Burma from the British. Not long before the independence was declared, Bogyoke Aung San was assassinated as he chaired a meeting of the Governor’s Executive Council in the British Secretariat Building, which is now derelict.

Known for its rose gardens, Maha Bandula Park offers views of city hall and other colonial buildings.  During the early morning, you can see people practicing tai chi, an internal Chinese martial art practiced for both its defense training and its health benefits.  It is also typically practiced for a variety of other personal reasons: its hard and soft martial art technique, demonstration competitions, and longevity. Just outside the west entrance several fortune tellers read the future to the ones who are interested.

There is a 500 Kyat entrance fee (for foreigners only, apparently). Once inside though, you’ll have plenty of space to walk around and take pictures. Maha Bandula Park is definitely a nice place to get away from the traffic and noises of the city.