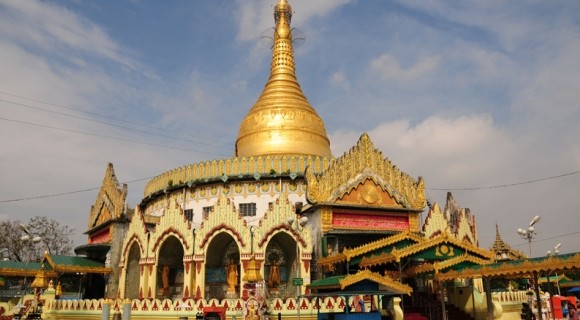 Located on Kabar Aye Road in Mayangone Township, Yangon, Kabar Aye Pagoda was the only one to be built during 1952. The name “Kaba Aye” in Myanmar means “World Peace” to which this pagoda is dedicated.

This pagoda is significant for the Sixth World Buddhist Synod which was held in its large precinct in 1954. Myanmar people follow Theravada Buddhism and are very deeply devoted to the religion. The Kabar Aye Pagoda was built in dedication to the Sixth Buddhist Council, which was held during 1954-56 Kabar Aye Pagoda was built in 1954. Its compound is a large one intended to have peace and quiet environment for the monks (Sangas) and the devotees.

For structure, the circular platform around the main stupa is enclosed in the manner of a cave-temple and there are five porches decorated in the traditional style of flamboyant arched pediments, lotus flowers, lotus buds and the swastika motif in carved stucco. In passing it might be pertinent to explain why and how the swastika came to be associated with Buddhism. As some dictionaries of the English language will point out, the origin of the term swastika is svastika from Sanskrit denoting "well being"-the device being associated with sun worship and veneration of the wheel originating with the ancient Aryans. However, to Buddhists, it is in the context of its association with Dhammacakka (the Wheel of Law), the first sermon preached by the Buddha after attaining enlightenment, that this rotating wheel motif is employed on religious structures.

The main stupa is 117 feet 6 inches (35.82m) high with subsidiary smaller pagodas on the five porches each 8 feet (2.4m) high. The compound of the Kabar Aye Pagoda is a large one consisting of many monasteries and the stairways to the pagoda are full of vendors on both sides selling many hand made products.

At Kabar Aye Pagoda, you can find Buddhist Art Museum, which has a wide collection of religious paraphernalia and Buddhist texts. To the north of the World Peace Pagoda, there is a great man-made cave made in the shape of the "Sattapani Grotto" near Rajagaha city of India where the first Buddhist Synod or Great Council was held just some months after the Buddha went through Parinivarna, the Decease. The name of the Kabar Aye Cave is "Maha Pasana", meaning "Great Cave of Stone" and was built in 1953.  It was in this great cavern that the Sixth Buddhist Synod was inaugurated in the year 2498 of the Buddhist Era (1954 AD) with 2500 venerable monks convening to recite and verify the words of the Buddha in Pali, the entire Tipitaka, which in printed form would take up about 40 volumes.