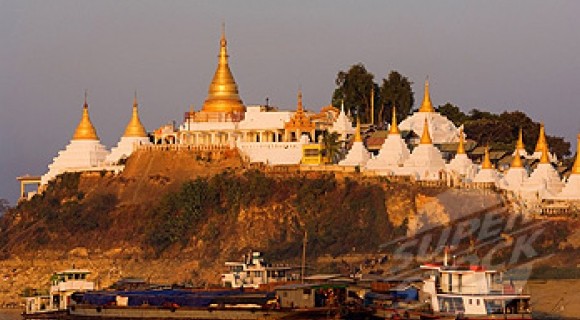 Located in the central part of Myanmar, on the eastern bank of the Ayeyawaddy River, Magway is the capital city of Magway Region. Upon your budget and preferred transportation, you can reach Magway by car, air or boat. It is around 378 miles from Yangon by waterways and 330 miles by road.

This midsize city’s maze of narrow streets leads visitors to the Mya-Tha-Lun Pagoda, which stands at the north of the city as a beautiful, well-preserved gilded stupa, occupying a hilltop site with a great river view. The legend says that the Pagoda was first built by demon brothers. After that, the renovation and maintenance passed onto the newer generations. Also, it is supposed to be made of solid gold bricks with many rumors surrounding the worships of spirits (both saints and elements of nature).

Across the river, north to the bridge is Nga Ka Pwe Taung, which is a belching pool on the top of four odd mounds. The largest mound is named Thu Sei Ta, standing second is Nanda, for the mythical Dragon Myanmar King’s daughter and son respectively. The sludge is not hot if you slip your toes in, washing them off below at a small pagoda, which features two giant pythons that get fed “buffalo milk” daily. Here you can also find Magway-Minbu. On the winding road north from Minbu area a couple of eateries overlooking the river. In addition, you can see from afar the “Shin Pin Set Kein Te” Pagoda with its golden shining.

When you look out from this Pagoda, you will see the splendid city scene of Magway and the dormant volcano namely Na Gar Pwat, which is spurting out boiling mud. Given a continuous mild eruptions of mud, it has gradually transformed into a very high hill of mud. The direction of lava flow changes every three months. At the foot of the Na Gar Pwat Hill, you will see two big snakes, which people believe to be the guardians of the hill.

West of Minbu for 16 miles, you will have chance to experience the culture of Myanmar with the old city of Laikaing. Here you will find the Kyaungdawgyi monastery built over 110 years ago, and constructed completely with teak. Here is the place for a wide array of Myanmar handicraft of wood-carvings and embossing. And if heading to the North of Minbu, you can visit Pwint Phyu Township, where you can observe Sandaku Nantha Kyaung Pagoda. Interestingly, in the compounding of this pagoda, you will find Kudoe Seik and fed the huge fishes which are said to be guarding the pagoda during July to September. 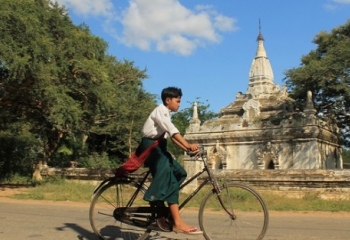 Mysterious Yangon and Bagan on cycle 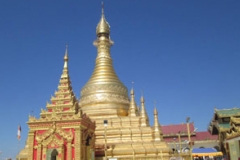