Sacred pagodas within and around Bago, Myanmar always impress visitors by the huge size, the meticulous sculpture and mysterious legends inside. Among them, Kyaik Pun Pagoda with Four Seated Buddha is really a great combination of art, culture and psychic.

Constructed by King Dhamma Zedi in 15th century, Kyaik Pun Pagoda is famous for four giant Buddha Statues sitting back to back against a huge pink pillar at the centre, surrounded by a small and beautiful campus with many lush shade trees. They face four directions: east, west, south, north, representing four great Buddha: Kakusandha, Kassapa, Konagamana, and Gautama Buddha respectively. Sometimes we can see few Buddhist or pilgrims sitting meditation and praying around them. Moreover, many figurines with hands in prayer position are scattered throughout the pagoda. Its scale is actually rather small among a large number of numerous temples having magnificent architecture in Myanmar. However, four huge Buddha statues along with the mysterious legend since the past attract a lot of tourists come here every year

Legend has it that there were four sisters; each of them was responsible for building a statue at the same time. They had spiritual connection with statues through a vow that they won’t get married until their death. If anyone broke this vow, the statues would lose the connection and collapse. In 1930, a horrible earthquake damaged a large area of Bagon including Kassapa Statue. The local people believe that one of these sisters violated the vow, which made Kassapa Buddha angry leading to natural disaster as a result of this betrayal. Today, it has been reconstructed and looks slightly different from the remaining images. Thanks to some repairs and repainting, four statues remains magnificence and sophistication as new one. They seem to watch silently the beautiful landscape of Bago and the lives of the people here.

In contrast to the inner quiet and sacred atmosphere, there are many handicraft stalls in the short walkway leading to the temple with lots of visitors stopping to watch and purchase. You will find beautiful souvenirs at affordable prices in here. Moreover, travelers have to pay a small fee for their camera, which is $3.

After a long history, Kyaik Pun Pagoda with four enormous Buddha Statues is still preserved and praised as the patron saints of the Myanmar people. It is one of the famous historical sites and most revered in Bago. 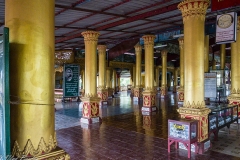 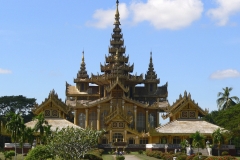 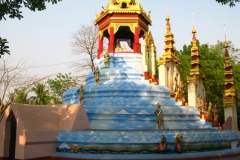 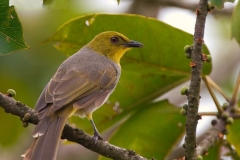 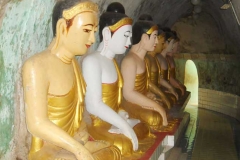 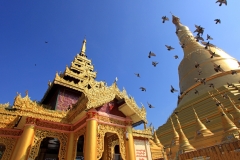 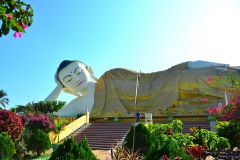