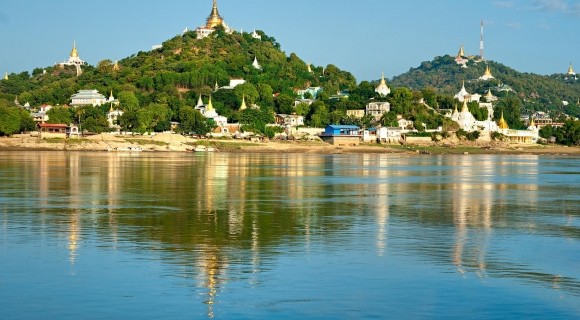 Sagaing was the royal capital for only three years before nearby Inwa took over in 1764, but it remains an important spiritual town attracting many people to meditate in its monasteries. One of the most captivating places which contain hundreds of stupas is Sagaing Hill. You can walk up Sagaing Hill (240m/787 ft) or take a taxi to the top and wander down. There are great views of the town, the Irrawaddy and Ava (Inwa) Bridge. Covered paths along the hillside connect the monasteries and monuments to each other.

This hill has numerous pagodas, monasteries and meditation centers known as a peacefule place for Buddhist studies. It is the place where you can enjoy the magnificent views over Sagaing.

The Soon Oo Ponya Shin Pagoda is located on the top of the Sagaing Hill. It is one of the oldest temples on Sagaing Hill. All the pagodas in area, it receives the first of alms offering made. It was built in 1312 by Minister Pon Nya. Pagoda Festival is held on the fullmoon day of Waso (July).It is decorated with glass tiles for an unusual shimmering effect. It has some interesting paintings and statues, and fantastic views over the Buddhist University, other temples and pagoda below.

Moving a few miles north of the hill, you can see Kaungmudaw Pagoda, which is built in 1648 in an unusual white domed shape. While there are interesting theories about the source of that shape, it is most likely to have been inspired by Ceylon’s Maha Zeti Pagoda. The 46-meter (150-ft) tall dome houses a large white marble Buddha in its center and a relic chamber. Over 800 stone pillars circle the base along with image-filled niches. 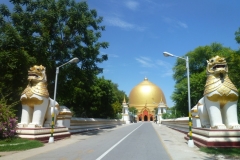 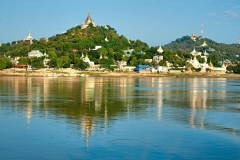 Sagaing Hill
Sagaing was the royal capital for only three years before nearby Inwa took over in 1764, but it...